Reaching more than a century of service is a rarity for any company, no matter the type. For heavy construction contractors, who often face greater long term challenges and risks than firms in other industries, the achievement is truly exceptional. We are one of few heavy construction contractors to have reached such a historic milestone.
When our founder Patrick F. McCarthy emigrated from Ireland to Iowa at age seventeen, he could not have imagined the impact he would have on the industry. Starting out as a water boy, he quickly advanced to stone-cutter, to foreman, then became the superintendent.
In 1897, he founded the McCarthy Stone Company in Davenport, IA and incorporated as McCarthy Improvement Company on Feb. 28, 1903.
Five generations later, his family-run company is still committed to industry advancement.
Explore our historical milestones below. 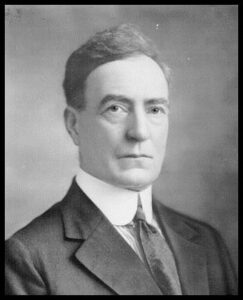 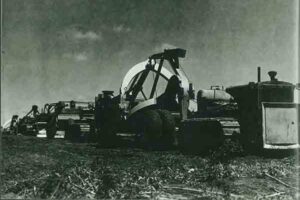 One of the first projects on record is the paving of Main Street in Davenport, IA just north of Locust Street. 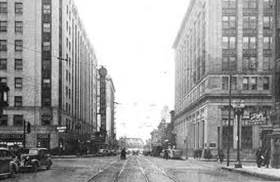 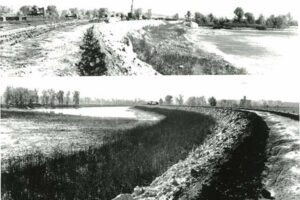 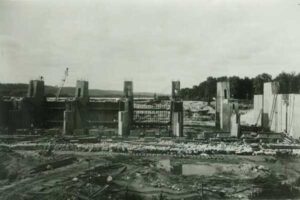 The first tie-arch form bridge across the Mississippi, the Centennial bridge, cost $1.75 million to construct.[1] It was designed by engineering firm Howard-Needles, Tammen and Bergendoff, and McCarthy Improvement built the foundation. Work began in 1939 and the bridge was officially open for traffic July 21, 1940.

McCarthy Improvement Company bought Linwood Stone and Cement Company at a sheriff’s sale for $32,000 for land and equipment.  It has go on to become sister company, Linwood Mining and Minerals.

Water-related construction expands in the Midwest and throughout the Southeast.

Completion of I-30 bridge in Clinton, IA. 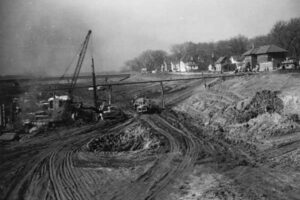 McCarthy Improvement Company returned to heavy highway and roadway paving, working on sections of Interstates 57, 74, 80 and 235.

Did the first slip-form paving job in the State of Illinois – I-80.

McCarthy Improvement acquire Howard Steel on March 15, 1974.  It has since become a sister company under McCarthy-Bush Corp. 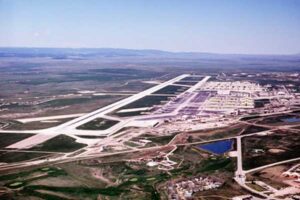 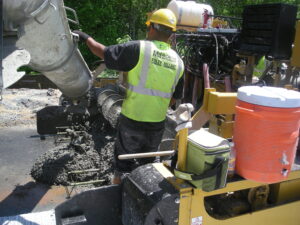 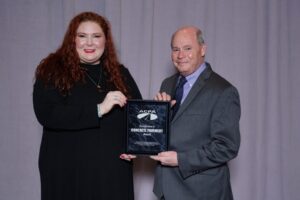 In 1903, we incorporated and became McCarthy Improvement Company; the same time government initiatives to create roads and highways in America became popularly known as improvement projects. We paved numerous roads throughout Iowa and Illinois and constructed the foundation of the Centennial Bridge across the Mississippi River. By the 1920s, we employed over 500 workers at the peak of the construction season. This remarkable growth was largely due to the reputation we earned for performing quality work.

After establishing ourselves as paving specialists, we began to diversify, fulfilling contracts for building rights-of-way and laying tracks on Pennsylvania, New York Central, Chicago, Milwaukee, St. Paul, Santa Fe, and Southern Railroads. When Congress passed the Rivers and Harbors Bill in 1927, we extended our services to construct numerous locks and dams along the Mississippi River.

Water-related construction continued throughout the forties and fifties as we expanded throughout the Midwest to the Southeast. Projects included the building of the $3.5M Santee-Cooper Dam near Charleston, SC; flood-control measures on the Ohio River; the massive $11M Fort Randall Dam project in Yankton, SD; and the Kansas Turnpike.

The sixties and seventies marked a strong return to roadway paving. Awarded contracts for the Illinois Toll Way and sections of Interstates 57, 74, 80, and 235 brought us back to the core expertise we refined over the course of seventy years.

By 1997, we reached a century of service. While we diversified the scope, our focus remained on our core expertise—concrete and asphalt paving. Quality had become our benchmark, but we concentrated on raising the bar higher.

Our internal raising of the bar paralleled with increased demands coming from state transportation agencies and other project owners. This energized our efforts to pioneer partnership in testing and Quality Control/Quality Assurance.

We believed partnering would foster solid working relationships and outstanding quality. Having fully embraced this concept, we were thrilled when the Iowa Department of Transportation began to implement the partnering model into some of their projects in 1992. IDOT’s goal was to have one partnering project in each of its six regions. We volunteered to partner on two projects in that first year.

In addition to being first to partner on projects in the state of Iowa, we spearheaded partnering firsts in states throughout the Midwest and Southeast, constructing the first partnership project by the Illinois DOT; the Knox County I-74 concrete overlay, for which we earned the national ACPA award, and orchestrated the first partnered project by the Georgia DOT; the Atlanta to Athens Highway 316, known as University Parkway.

We are particularly proud of urging the Nashville Airport Authority to participate in their first partnering project, the new construction of 8,000-foot Runway 2C/20C. Being a very aggressive project to start in October and be open to air traffic by the following May 1, it was especially indicative of the potential benefits partnering can provide.

The NAA agreed to partner, largely due to commitments to American Airlines, but they imposed a $20,000-a-day liquidated damages clause if we did not meet the stringent deadline. It was rewarding to have completed the job on time, but receiving the Airport Authority’s crystal commendation, recognizing the effectiveness of our working style, made it even more so.

As our name implies, McCarthy Improvement is dedicated to the continuous improvement of quality, efficiency, and reliability in the heavy construction industry, constantly evolving the way business is done to meet those goals. In the new millennium, we acquired Foley Construction,  Bellamy Bridge Builders, and recently Ballenger Paving to meet this aim through turnkey solutions.

Our turnkey approach is geared to bring projects in on time in the best possible way. Our team takes initiative to save clients money through efficiency and reliability, and because we work together, scheduling is proactive and fine-tuned. Customer satisfaction is what maintains the longevity of any company, and our trinity of experts has a longstanding track record for meeting and exceeding private and public sector needs alike.